The report is largely based on data from the Gallup World Poll, which surveys about 1,000 people per country in nearly 200 countries. Among other things, participants are asked to evaluate and score their life on a scale of 0-10, with 10 being their best possible life and 0 being their worst. Based on these responses, the report ranks the happiest countries. The top 20 happiest countries are shown in the chart below, and you’ll see the United States is now in spot #16, up from #19 last year. 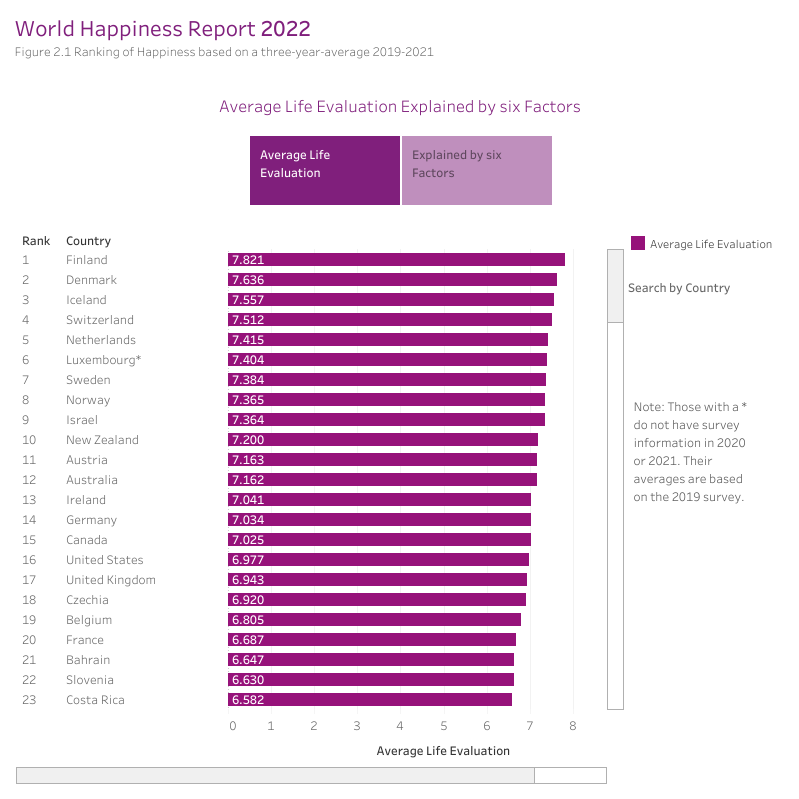 In addition to ranking the happiest countries, the report noted a “pandemic of benevolence” that occurred in 2021. Gallup World Poll asked people if they helped a stranger, donated to charity, or volunteered in the past month. The World Happiness Report then measured “global benevolence” as the average of those three prosocial behaviors, and the 2021 figure was nearly 25% higher than its pre-pandemic level.

“This surge of benevolence, which was especially great for the helping of strangers, provides powerful evidence that people respond to help others in need,” wrote the report’s co-author Dr. John Helliwell, Professor Emeritus of Economics at the University of British Columbia.

This is not unlike the data presented in the 2021 DAF Report by National Philanthropic Trust, as discussed here. Contributions to donor-advised funds increased by over 20% during the pandemic, and grants from DAFs to charities increased by 27%. DAF donors were ready and willing to respond financially to the needs faced in 2020.

Whatever the giving vehicle or method, responding to help others boosts our own happiness. According to the World Happiness Report, as the frequency of benevolence increased, the frequency of negative emotions and their affect decreased.

“There is a happiness bonus when people get the chance to see the goodness of others in action and to be of service themselves,” Helliwell continued. So, whether you volunteer your time or donate your money, you’ll likely find yourself a good bit happier for it.

There are thousands of nonprofits around the world doing incredible work. HighGround is privileged to work with over 470 of them. Perhaps you, too, know the privilege of partnering with nonprofits to advance their important missions…and to make the world a happier place.

If you’d like to learn how you can maximize your charitable giving in support of nonprofits, call us at 214.978.3300 today.